Virginia has entered phase one of reopening.

As for us, we're still going to be minimizing our exposure as much as we can. Which means, groceries and class and not much else.

Martial arts and C.O.B.R.A. classes start back, in person on Monday, outside only, limited to 10 people, 10 feet apart. We have to sign up the Friday before, for the next week's classes, to be able to do them. We can't simply show up. We can still do the Zoom classes too.

And we get to start working with the Bo staff.

Because it's mainly hands off and you practically *need* that 10 ft spacing. Heh.

It's up to us as to whether we want to wear a mask for the outside classes- for us that will be a yes, emphatically, because better safe than sorry. 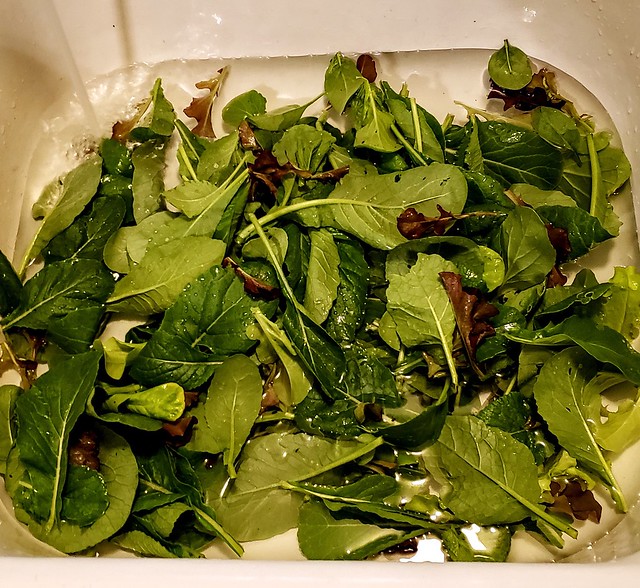 The lettuce and spinach are finally taking off, so we harvested a sinkful last night. It was tasty on tuna fish sandwiches, and I had more than enough for a big lunch salad for Mark, and will have one myself in a bit.

The rest of the garden is settling in. A couple tomatoes have too much frost damage, despite being covered, one at least I know isn't going to make it. Still watching the other. Can't remember which hill was what for the cucumbers, zucchini and butternut squash, but 2 hills have done nothing. I suspect its the zucchini, so need to find either seeds or seedlings if we can. Otherwise, I'll plant more cucumbers. Leviathan will eat those as well as zucchini.

The irises are going nuts with blooms this year. Ones that haven't bloomed since we moved here, are now blooming. Of course, I fed them this year too. Can't wait to see what the others turn out to be. So far, all along the porch has been shades of purples. Which plays nicely with the fuschia azaleas and the orange azalea.

Until I have more time available to me...

My brother finally moved out, after a year of living with us. After telling him, repeatedly, to save money for deposits that he may or may not have, he still ended up 500.00 short for electric and water deposits. And now has a loan out with our mother.

Like clockwork, 2 weeks after he moved out, he made himself sick. *Every month*, he'd get sick for a week. He'd claim it was his stomach, we think it was deliberate. *Every. Month.*

We lost Miss Sassy, suddenly, in December 2018. She's buried out back, as will all our pets from now on. Morrigan, Caena and Leo are doing well.

My mother in law is in the final stages of Alzheimer's. WE expect by the end of the year, she'll be gone. Of course, she could fool all of us and hang on for another few years.

My dad had a new pacemaker put in, it deals with *both* D-fib and A-fib, since, he's contrary and has both. He's doing much better now.

My second oldest niece is expecting her first, a boy, this Christmas.
My oldest niece apparently is going by 'Owen' now. I have no idea if that means they are deciding to transition or what, as we do not actually communicate.

My youngest niece graduated high school, will be attending community college for a few years, then transferring to a university.

Garden did exceedingly well this year. Lots of beans, tomatoes, cucumbers, peppers, some zucchini, some potatoes. Pulling the sweet potatoes this weekend, hoping for lots of those too.

Still weaving, took the summer off, have a show the end of next month, then one a month for the next three. Have a whole list of things to create between now and then, so back to work I go.