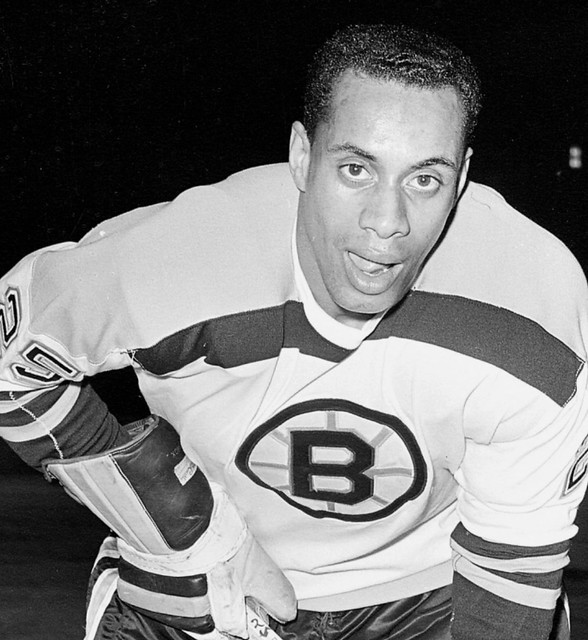 Canadian Ice Hockey player, who played for the Boston Bruins as a winger. Made his debut on January 18, 1958, 63 years ago today.

Feb 18, 2021, before the Bruins game with the New Jersey Devils, his #22 jersey will be officially retired.

He was also the first black ice hockey player.

Born in Oct 1935, in New Brunswick, Canada, he started his hockey career with the Quebec Aces, a minor league 'farm team'. He took an errant puck to his right eye, effectively blinding him.

Midway through his second season with the Aces, he was called up to the Boston Bruins, replacing an injured player. If they had known about his right eye, he never would have played professional hockey.

Somehow, he managed to keep it a secret and went on to play 2 games that season, returning in 1961 to play another 43 games, scoring 4 goals, and 10 assists, all in the 1961 season, a record for his entire career.

He noted that racist remarks were worse in host US cities than Canada, saying fans would yell, 'go back South!', 'How come you're not picking cotton?' and worse.

He played 50 games with the American Hockey League New Haven Nighthawks,in 1972-73, but played most of his career with the WHL's Los Angeles Blades and San Diego Gulls.

The San Diego Gulls retired his jersey to the rafters of Pechanga Arena.

He continued to play in the ice hockey minor leagues until the age of 43.

After O'Ree, there were no other Black ice hockey players signed to the NHL until Canadian Mike Marson in 1974.

Since 1998, he has been the NHL Diversity Ambassador.
Tags: black history we should know, hockey, montage