In between project stuff..,

So I'm between weaving projects right now, and needed to finish the quilt top, so I could potentially have it finished by March.

That means, catching up on piling up sewing projects.

Still haven't washed, blocked and cut out the border for the next square in the baby quilt for Jace though. That might happen today.

The big project was the last 3 rows for the quilt top. I pieced them together, and sewed the 3 rows to each other. So far, so good, I was relatively happy with it.

After a final seam, the quilt top was done except for ironing that last seam open. Yeah, this will work. Heh. Not bad for only have 5 pins with which to pin the pieces with. (Thanks, house, I'd really like my box of quilting pins back now please.)

It's not quite a square, not a rectangle. Not as long as I expected the finished piece to be. Still debating tweaking the bottom and adding a row of white. But , to *this point*, it's finished. I can see what the end result will be and I'm fairly happy with it.

This afternoon, I'll have to hang it and get a full shot of it.

But first, I need to order batting and backing fabric.

Today's prompt is "In Situ" for the #CTMonthInTheLife 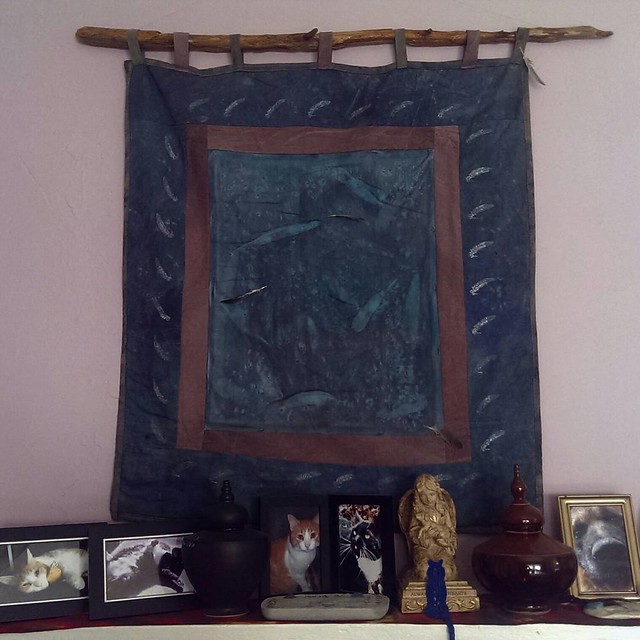 This is one of my first artquilts hanging above the mantle in the bedroom where Dante, Max and Aries reside. 'Icarus Falling ' is hand dyed, handsewn, stamped, embellished with real found feathers and sunprinted with feathers and saltdyed . The wood piece is genuine #driftwood, sourced locally.

It is also not for sale. 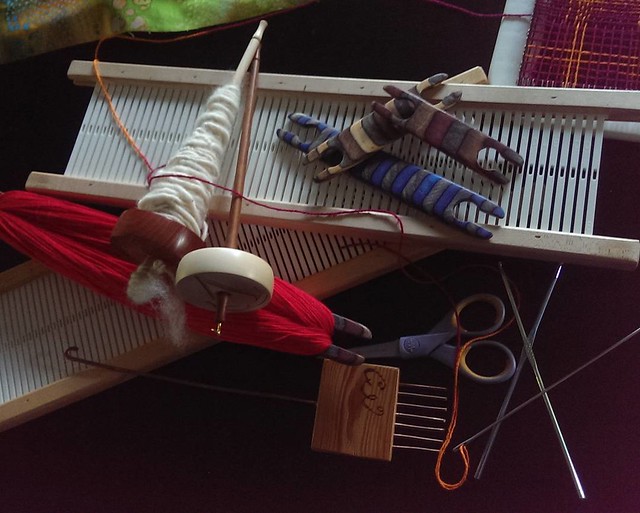 These are just a few of the tools I use to create my pieces.
There's no way I'd be able to photograph everything in one shot. :)

Nearly halfway there! So far, so good...

The prompt for today is " Vignette" 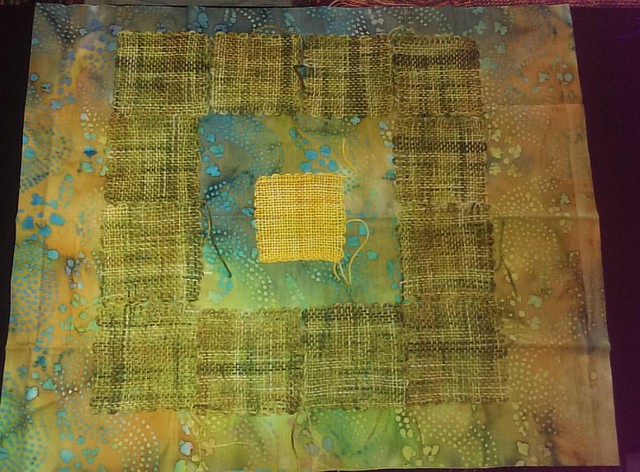 This is a work in progress look at a future artquilt , combining weaving with fabric. The layout is a general idea of what it may end up eventually looking like as a wall hanging. Currently, I have finished the edge on the yellow woven square and have all but two of the woven green squares attached to each other, then need to finish the inside and outside edges. Then I'll figure out how exactly it'll look on the fabric, placement wise. Bright, funky colors that are out of my norm, I'm liking it.

Finished things, for sale and not...

So several years ago, I started the embroidery on this quilt and never finished it until recently. Not only did I finish the broidery, I then put the blocks together and made it into a quilt top. Then I managed to actually quilt it.

It's not perfect, there are wonky parts, but it's finished and the cats, who have taken it over the moment I tossed it across the end of the couch, don't care and love it. 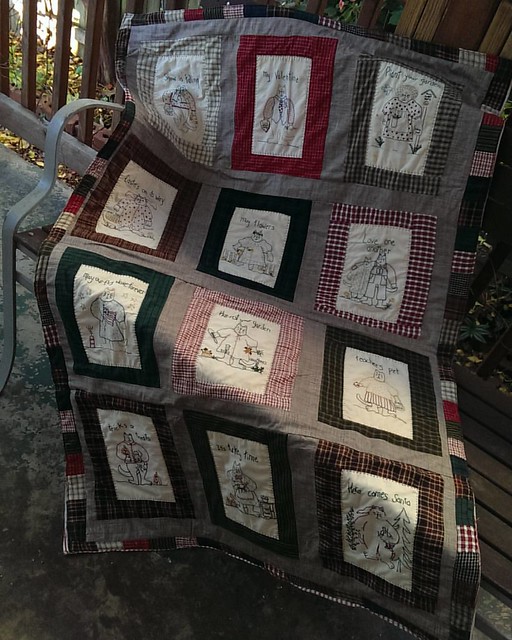 After I finished the embroidery of the above throw quilt, I designed and embroidered a quick, small art quilt hanging, along with several hand designed Akita embroidery blocks. 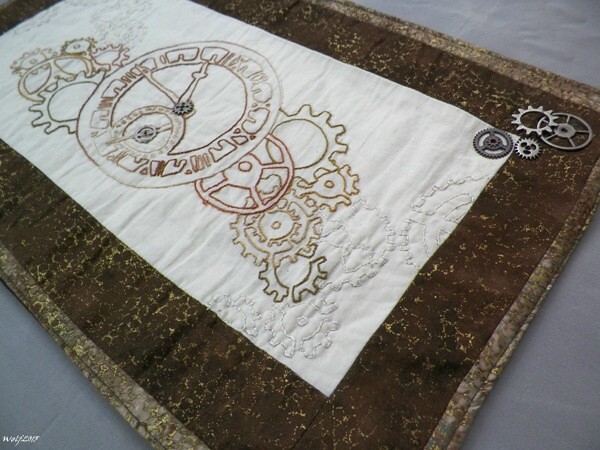 This particular piece is currently for sale here.

I needed more steampunk/clockwork themed pieces for Mysticon next February, so that's what's being worked on now. This is the first of a dozen or so pieces in the works. 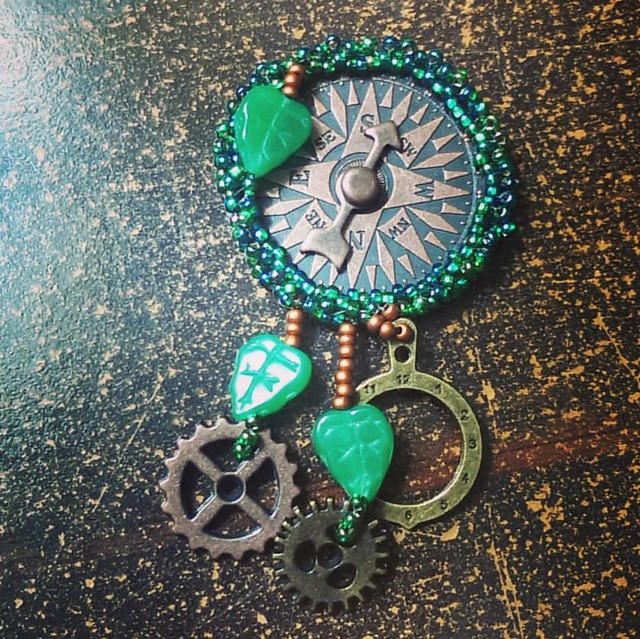 I'll post photos of each as they're finished, but these won't be put in the shop until March 2016, whatever doesn't sell at Mysticon.

Speaking of the shop, it's Cyber Monday and a great day to help support small Handmade busineses. You'll find lots of items in my shop marked down and on sale, so come check them out!

Such as this lovely 100% Silk Noil handwoven scarf or wrap- 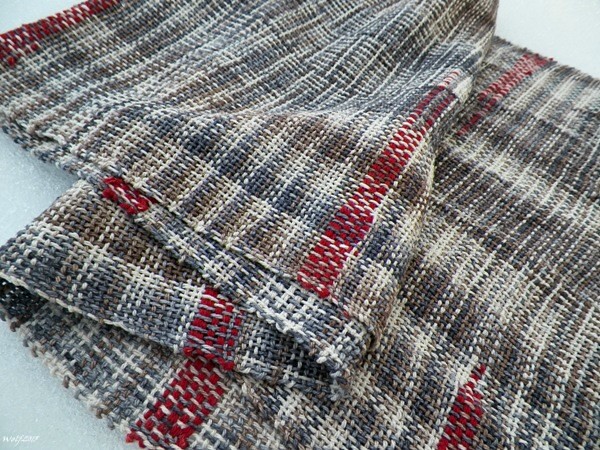 Barfight Aftermath is available here. There are lots more items, so definitely take a look!

Finished and in progress...

So this last week, I've been having fun figuring out the quirks of my new to me 75 yr old Sewing machine.

Quirks such as the owner's manual taken for granted that you already know how to change the foot on the machine (I didn't, so that was an adventure). Or that sometimes, but not always!, the needle must needs be in the down position before it'll start actually sewing. Or how it likes to unthread said needle at times. Hrm.

I also learned that the length of stitch has nothing to do with the tension and everything to do with the numbers on the forward and backward lever- yeah, that wasn't in the book either. And also that the photos of the different feet in the book may not actually match what they look like in actuality. Figuring out the quilting foot was interesting.

But, it was still fun and that machine is a real workhorse.

I not only made a Tesselcats wallhanging, completely from scratch and almost entirely machine sewn, I pulled out the cat of the month embroidery blocks I'd started almost 10 years ago and never finished and subsequently finished 5 of them. I should say, finished turning 4 of them into actual blocks and finished embroidering, then turning into an actual block, the fifth one.

Tesselcats top. It's not perfect, but the husband for whom it was made, doesn't care.

The finished wallhanging, complete with a simple outline quilting.

I ended up hand sewing the binding on, after machine sewing the various pieces together. Learning the quirks of the quilting foot is going to take a couple more tries.

But these cat of the month blocks turned out beautifully-

This is a fun combination of both handsewing and machine sewing. The finished size isn't very large, so I'm adapting the original finishing design to add sashing between not only the blocks, but the rows of blocks as well, that'll add another 2 inches between the blocks on the sides and top/bottom. Then I'm considering piecing together a strip of the outline plaids from each block to go around the very outside to add another 2 inches around, followed by another 2 inch strip of sashing, then the binding. Over all, that should add at least 12 inches to each side, making it closer to 48 inches long by 46 inches wide, instead of 36 inches by 34 inches, roughly.

The next step is finding a nice fabric that'll compliment light and dark red and green plaids.}:P After that, I'll have a nice, handmade throw quilt.


Have I mentioned I love this machine, quirks and all? Yeah.