There'll be peace when you're done...

Over did it yesterday. Of course I did.

Got up early to go do laundry, around 7am. Have to stay to use the dryers there now, since ours has decided it wants to start dying- the washer died last summer. Hope to replace both by the end of the year.

Came home, fed the dogs and then had breakfast. Watched the rest of CBS Sunday Morning, then proceeded to do things.

Vacuumed the house, all 6 rooms on the first floor. Mark had picked up the ottomans, dog bed and toys, so was able to thoroughly vacuum under everything and do an extra good job. He did the dishes while I vacuumed.

Took the leaf out of the dining table in the library. We don't actually use it and with only the two of us, don't need an extra long table. Two chairs also went upstairs, along with the window fans that won't be needed until next spring. One did get put in the far attic window to aid in circulation up there. There's a third in the upstairs sewing studio window. They help.

Mark took a break from deep cleaning the kitchen to help move plants in from outside. Some areas are expecting a first frost this coming weekend, so better to move plants now than to wait.

Moved the outdoor table we never use off the enclosed back porch and to the Murder Shed, rearranged the outdoor chairs and put a board across them for outside plants to overwinter out there on. After we wrap the screen insert in the back door with a double layer of heavy plastic sheeting, it gets pretty warm out there during the day. I've successfully overwintered plants out there the last 3 winters now.

Mark moved the nail for the kitchen wall clock for me. After wiping the wall down- it's right above the stove, while I scrubbed the clock down.

He scrubbed all the counters, the stove, the island, while I scrubbed down the front of the sink cabinet- it's a vintage farmhouse style all in one metal cabinet and sink. I wiped down the fridge and the outside of the microwave- he'd already done the inside.

Cleaned the front porch off after the plants were moved. Took the cat shelter I acquired and set it up in the far corner, for a feeding station for the Barn Kitteh that hangs out in the area. Have a storage container and styrofoam cooler to build a sleeping shelter for them as well. Porch looks so empty now without the plants on it.

Fezzik got new finery. I finally got around to making an Autumn themed wreath for him. Have the 36" wreaths for a Spring and Summer themed ones, just haven't made them up yet. Got a few more metal sunflowers too, though, not any large ones like the one in the photo. We waited too long to hit the sales at JoAnn's where we found them last year, so only got 2 more of the smallest ones.

Cleaned the bathroom, and replaced the clear shower curtain finally, after the replacement sitting there for a month. The old one had been there since long before we moved. It was well passed time to be replaced. The new one has suction cups on the sides, so it'll help keep one end in place and water won't get all over the floor.

Finally sat down with a drink and a snack around 230-3pm. Watched the first third of Supernatural Season 10- yes, we came late to the show. Luckily TNT shows them in reruns so we were able to DVR every season through Season 13 over the last couple years and gradually work our way through them. TNT needs to show all of Season 14 in one go, rather than a few episodes here and there, interspersed with other seasons and we'll have all of them.Yes, we are DVRing Season 15, the final season as it airs. 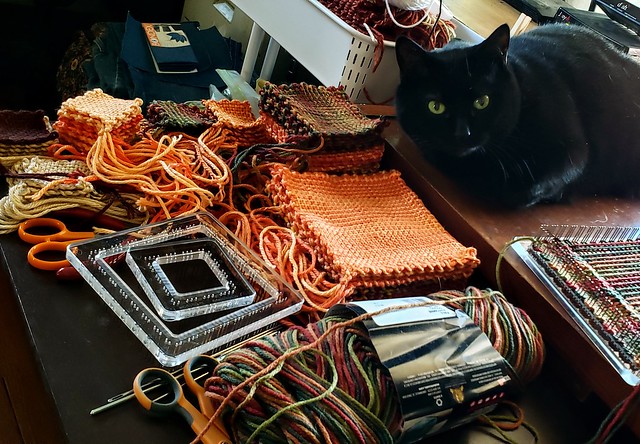 I lost count of how many squares I've made for pumpkins. Need to make 5 more of the dark fall multicolor, then some more for ghosts and witches, then I can start putting them all togethr. Also need to wrap our Halloween costume holsters in leather, by Friday. Dojo Halloween party is Saturday. Mark made the holsters on this passed Saturday. They hold 4 of our Nerf gun pistols. We're going as gunslingers this year.

After the pumpkins and Halloween themed stuff is made, need to make turkeys more snowmen and santas. Also need to work on this year's pin loom woven ornament. Then I need to weave some scarves and line them with fabric, make more themed gaming bags and themed charm bracelets, steampunk stuff for Mysticon next February.

Some day I'll be able to take a break. Today is not that day. Right now I'm going to go eat a locally grown Arkansas Black apple.}:P And try to work the stiffness out.

No, Fit, I am not cycling. I just type fast.